UPDATE: This item is no longer available.  However, I'm adjusting the post to keep it up for information content.

Recently, I decided to sell a rather nice Microman piece from my collection: the battery-powered Microman Blizzard B-3 Vesta and its Mystery Jet. Since I spent a little bit of time with the item, here are some pictures and thoughts to share about this rather unusual piece in the Microman line. 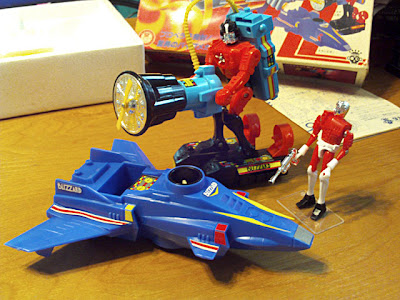 This is a deluxe boxed set from the original Microman line, 1980.  One of four Blizzard Micromen, Vesta was one of two that were also released as a deluxe figure & vehicle set.  GiG released one of the other Blizzard Microman toys in the Italian Micronauts line.  This Microman edition is a different color combination than the one GiG used, and includes a large blue jet with motorized action, in addition to two spinning disk weapons.  The Blizzard Micromen developed large, armored bodies and deep-cold weaponry as an adaptation to the part of space they fled to after the destruction of the Microman homeworld - a part of space with intense magnetic fields. 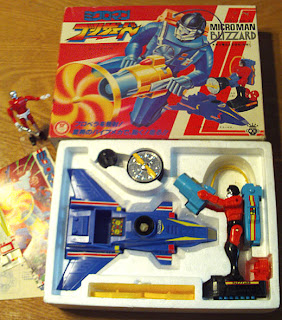 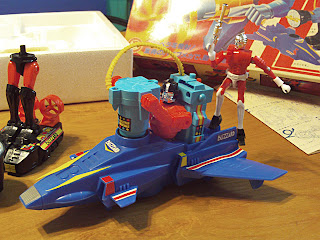 The toys feature a battery-powered motor that creates a vibration that causes the Blizzard to 'hover' on the unique structures built into the heavy armored figure's feet, and to launch spinning blades from the huge cannon it holds.  Also, the Blizzard's legs can be removed and it can be attached into the Mystery Jet, where the motorized action makes the jet move in the classic bump-and-go 'mystery action'.  Have races with Battle Cruiser!  (Shown for size comparison is one of the latter original series Microman figures contemporary to Blizzard, although he isn't included with the set.)

On the surface, the Blizzards seem a bit of a diversion from the usual Micro line, but that may be the perspective from the Micronauts side of the property, which didn't have the wide range of battery-operated giant robot toys that the Microman portion of the line did.  However, the toy proved somewhat unpopular in Japan as well.  While it still fetches good prices in the collector market due to its original price point and larger size, it doesn't attract nearly the desire of piece like Mecha Acroyear, the latter Robotman [aka Biotron] variation and such. 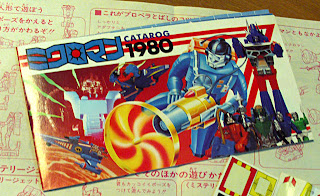 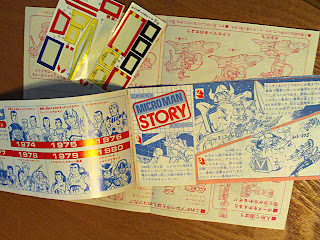 An all new FORCE COMMANDER

Have you always wanted a Micronauts FORCE COMMANDER scaled at 3 & 3/4 inches with the rest of the Micronauts, so you could include Prince Argon in the adventures played out in the Marvel comic book?  Mego passed up the chance, but Micronauts collector and craftsman Austin Richards has developed just the thing: Flight Commander!!!  This is a carefully designed resin cast, fully functioning and fully Micro-compatible figure modelled after Force Commander and based on the Microman Jeeg figure.  You can order one of the small quantity available with the information at his blog here:

Austin's craftsmanship is meticulous and first-rate.  On in hand makes you think you have a lost prototype of an unproduced Micronaut.  You can see here with his much-admired, similarly designed ROBOID.  Go get one!

Posted by Unknown at 7:04 PM No comments:

Just a quick reminder that MEGOMEET 2012 - the annual gathering of Mego collectors of all types and the community of the Mego Museum - happens in Wheeling, West Virginia at the amazing Kruger Street Toy & Train Museum this coming Friday and Saturday, June 8th & 9th!

I'll be there.  I won't have anything on display this year, but I will have a stockpile of parts for Micronauts collectors who might need 'em - cheap, in-trade or free, depending on my mood at the moment.  And I'm always happy to chat about Micronauts for hours & hours....

The Tragic Tale of a Micronauts Creator 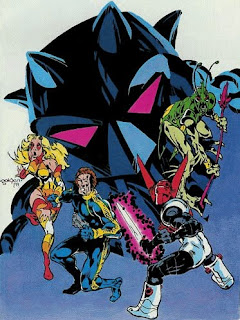 So many of us who grew up with Micronauts eagerly awaited every issue of the Micronauts comic book from Marvel. Today, many of us are also aware of the sad fate of Bill Mantlo - the writer who brought us an amazing, complex science fiction epic told in the pages of a comic book series that continued long after Micronauts left the toy stores and even after the Mego Corporation closed its doors and left the toy industry. The driven, energetic man's life as a comic book writer and full-time Legal Aid Society lawyer ended when he was struck by hit-and-run driver who left Mantalo with traumatic brain injuries from which his body and intellect has never recovered.


A detailed look at Mantlo's life, injury and long, tragic road afterward was surprisingly offered recently by LifeHealthPro - a website and on-line journal for the US health insurance industry:

"Bill Mantlo was a legendary writer for Marvel Comics in the 1970s and 1980s. But today, he inhabits a broken body abandoned by both the health insurance industry and the federal healthcare reform meant to help people like him. This is his story."

Bill Mantlo's tale is indeed tragic and difficult to read, and certainly - under the pen of LifeHealthPro's author - impossible to not consider even more acutely (by myself at least) in the light of the United States' current cultural and political re-assessment of privatized, corporate health care in our society.

Give it a read and some thought - the respect due a man who brought a great deal to many of our childhoods, but who lives now having lost so much.
Posted by Unknown at 3:12 PM 1 comment:

Several years ago, collector Austin Richards acquired several drawings of unproduced Micronauts toys: elaborate expansion sets for the Rocket Tubes system. While we're all slavering for new Micronauts news from Hasbro, there is still much more the original Micronauts line has to offer us! Rush right on over there now and allow your cogitator to feast upon the images and history behind one of Mego's most ambitious Micronaut offerings:

And, to jog your memory, another finely re-tuned Micronaut TV commercial from my laboratory...

Posted by Unknown at 8:22 PM No comments: 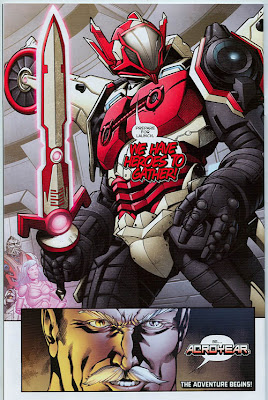 Thanks to friend Jon Riddick, I've got a copy of the Hasbro NYCC comic book in-hand. So, what's it all about? Micronauts, I'm happy to report, is central to the whole work. 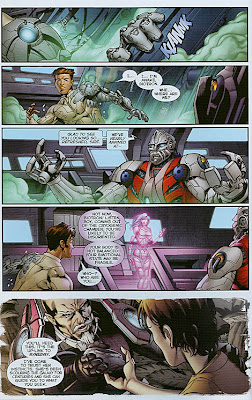 A young, new Acroyear has taken the armor and title handed down to him by his father, and awakens from a long period in stasis to find Biotron and a hologramatic A.I. named Synergy (originating from Jem and the Holograms) as his guardians and guides in a quest to find allies and inspirations from Earth and across the galaxy in a battle against Baron Karza. The Micronaut storytelling content is penciled by Robert Atkins. 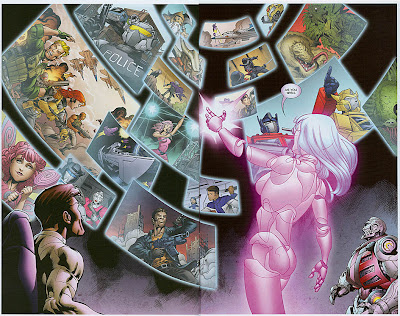 In the story, Synergy shows the fledgling Acroyear various heroes (all from the classic game and 80's toy properties Hasbro is in the process of rebranding and revitalizing) that she strongly suggests he acquire as allies, teachers and inspirations.

In the comic's afterward, Andy Schmidt - Hasbro's marketing manager for these properties and ex-IDW editor for Transformers and GI Joe - notes that the books is a 'love letter' of sorts to the fans of these properties, and isn't intended to be 'the ultimate brand expression for any one' of them. Meaning that the form of the final products these items are delivered to toy store shelves as might look and read absolutely nothing like this. I'd say that things are - as we're all aware - still in development and subject to approval. So, what does this say to those of us eager to know what Micronauts will look like next? 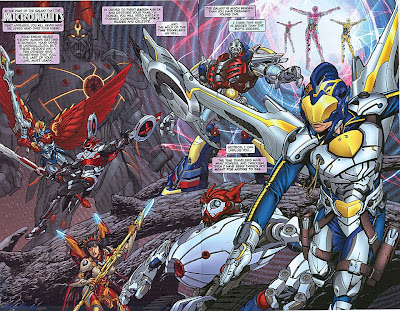 Judging by the mish-mash of styles at work in the Micronauts-related artwork in the issue and in spite of all the color and elaborate linework ... not too very much, in my analysis. But that's not a bad thing. Certainly, there's a lot there that indicates current design styles and classic influences will be there. If the rules-of-thumb we see here will continue to play out in the final products, we'll have figures that will be elaborately textured and colorful like the Micronauts of the past, and Micronaut toys that are largely recognizable as the classic Micronaut characters and toys. One spread (the third image above) shows this new trio of Micronauts relating to GI Joe, Generation 1 Transformers, and the other revitalized Hasbro properties. This suggests to me that perhaps something like the older Takara SF-Land standards might be put into play in the way that original Micronauts, Transformers and other toys originating from - or influenced by (GI Joe RAH?)- Takara can all interchange and play together based on a shared set of mechanical standards and scales. My kids love mixing Micronaut, Microman and Transformers toys and parts together, and populating the results with some other 1/18 scale figures.

My 2-cents? Hasbro and Tomy-Takara may develop Micronauts into something like the Magnepower Microman line combined with the Transformers Human Alliance line.

As a note of trivia - the two-page Micronauts spread is by Italian comic artist Emiliano Santalucia. He's been involved with the recent revitalization of the classic verisons of Transformers, GI Joe and Masters of the Universe for IDW, Hasbro and others. In his spread, astute eyes can see influences pulled from SOTA Toys' abandoned Micronauts:Evolution, Henshin Cyborg, Magnepower Microman, Microforce, and others. The thick stable of past iterations of Micronauts has been used as a resource for this printed work, at least.

It doesn't give us much concrete information to work with, but it will generate a lot of speculation and conversation among fans and collectors, which is a good thing! As they say, even bad press (not to say this is bad in any way!) is better than no press at all.
Posted by Unknown at 11:34 AM 3 comments: